Today, we finally get a look at some brand new footage of the game. So let’s dive right into it.

https://store.steampowered.com/app/969990/SpongeBob_SquarePants_Battle_for_Bikini_Bottom__Rehydrated/
Apparently the Steam page for the game was recently updated, I’m assuming today. With 4-new pieces of footage in the form of GIF’s, so there’s no audio. All of which I’d assume is from an even more updated build than the PAX East press build from last month.

The 1st piece of footage is once again from Jellyfish Fields, like we ain’t seen this for the 5,000th time. Not really much to point out here aside from the brightness & lighting compared to the PAX East press demo. It’s been toned down a bit, not nearly as bright as what we saw at PAX East though.

The 2nd piece of footage is actually our 1st look at any sort of Patrick gameplay whatsoever. As we’ve had nothing but screenshots of him up until now. Again, adding much more life to these characters.

Not only that, but it gives us our 1st, small look at the Mermalair level. This time around they went with a more chrome-ish theme instead of the darker color scheme of the OG. (Squidward Chrome) And even the level itself isn’t as dark before, even adding this mist or fog affect near the bottom which is a really nice touch. 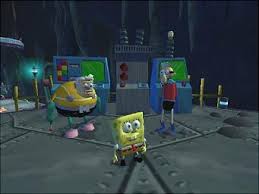 And these floating platforms that Patrick is jumping on are not just flat, circular platforms anymore. Instead they’ve got some more actual platform to them now. This spot is right next to Mermaidman, but we don’t see him in this footage. I should also mention that in a recent interview, it was confirmed that there’ll be no new recorded voice lines in this game. Meaning we’ll still get this. (Discount Krabs & Mermaidman) Just why!? I can understand Mermaidman, but Not Mr. Krabs!

Anyways, onto the 3rd piece of footage, which features our 1st look at some Sandy gameplay, but also a glimpse into the Robo-Patrick boss battle. And uhh…I don’t know what they were attempting with this boss here, but I’m not exactly a big fan of it. I mean, I can’t believe I’m about to say this, but I think the OG looks better in comparison. Like it has soo much more life in it than the Rehydrated version. Heck, it even looks more intimidating in comparision.

While this…I don’t know. I think it needs a bit more work. Specifically with the face & that animation. About the only thing I liked that was added to the boss itself, was the fact the “Kick Me Here” sign on his back is flapping around. 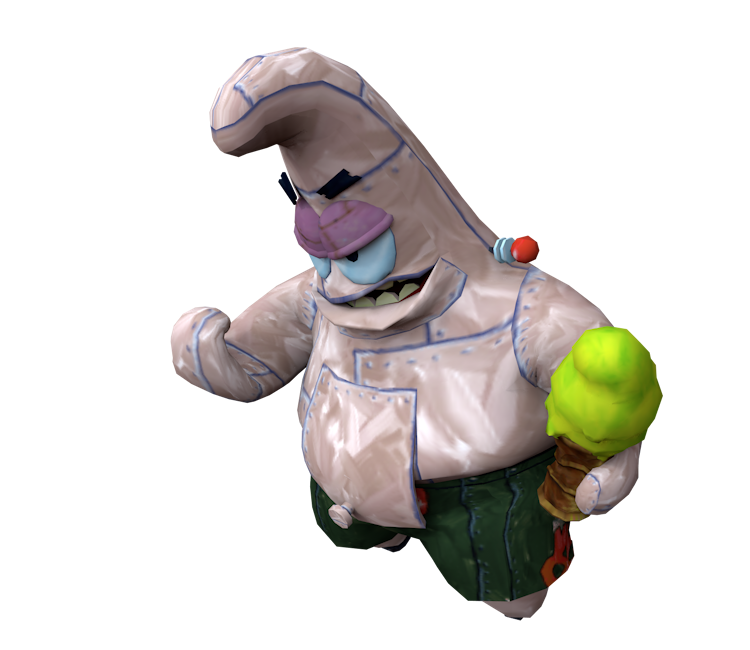 Moving on, when Robo-Patrick starts spewing goo toward Spongebob or in this case Sandy. There are now target indicators, making things a little bit easier to know where the goo will land. Whereas the OG did Not have that. Another nice addition.

The conveyor belts around the arena now have arrows on them to indicate which direction their going in. Again, something that the OG didn’t have & making things a bit easier.

Sandy looks to control just as good as the OG here, but in the 4th & final piece of footage. Which is the Sandy’s Dream section of Spongebob’s Dream, I can’t help but wonder why does it appear to be going so dang slow!? Yeah, I get it there are moments in the OG where you go pretty slow on slides, like going uphill & such. But oh my goodness Not this slow! Again, something that I think needs worked on a little bit more. Other than that the level looks really good.

Now I got one more thing to show you guys concerning the game before ending the video. And that’s this image of Rock Bottom, I don’t know the exact spot in the level this is, but it still looks just as good as ever! For those wondering this image was posted on Twitter by another Spongebob YouTuber, RidersDX. So if you want to check out his channel, the link will be in the description below.

The Rehydrated steam page got a face lift! Thanks to @SonMario_ for letting me know! pic.twitter.com/asbSjJkyxi

Something that I should mention before I go, is that since the Steam page has updated with all of this. It could be possible that a new trailer could be getting ready to release. And whenever that happens, who knows. But I’ll be sure to cover it once it arrives.

So what do you guys think of this new set of Spongebob Rehydrated teases? Be sure to let me know in the comments below!