Well PAX East took place over the weekend & with it, came a new demo for Spongebob Rehydrated.

Yes, it’s Jellyfish Fields again. But this time it’s an updated build compared to the Gamescom demo from August. Which was the exact same demo build at PAX East 2020, while the current build your seeing on-screen now was from a press only demo that was also present at PAX East 2020.

One of the biggest changes that’s immediately noticeable, is the lighting, brightness & contrast. Man I thought the last demo was pretty bright, but this one looks like it’s been turned up. Just look at the grass in the previous demo compared to the new one. As you can see it’s a much brighter green. 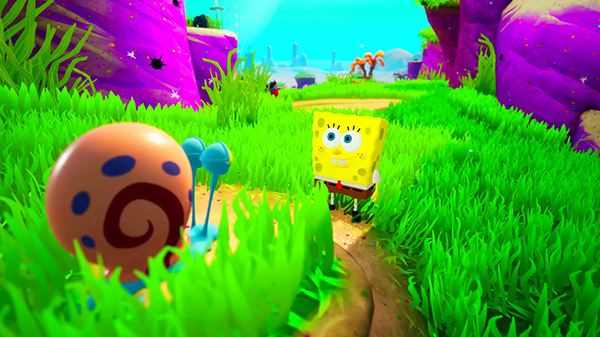 Speaking of colors, the wooden Tikis seem to have been given this glowing effect and you can see them sort of glitching out at points. I would assume that it’s due to the new transparency mechanic that was implemented. If you’ve played Ty, then you might know what I mean.

In part of the improved lighting, there are some added shadows which is a rather nice touch. Might not be noticeable in the rest of the demo, but intro cutscene with Squidward, you can definitely tell the differences. 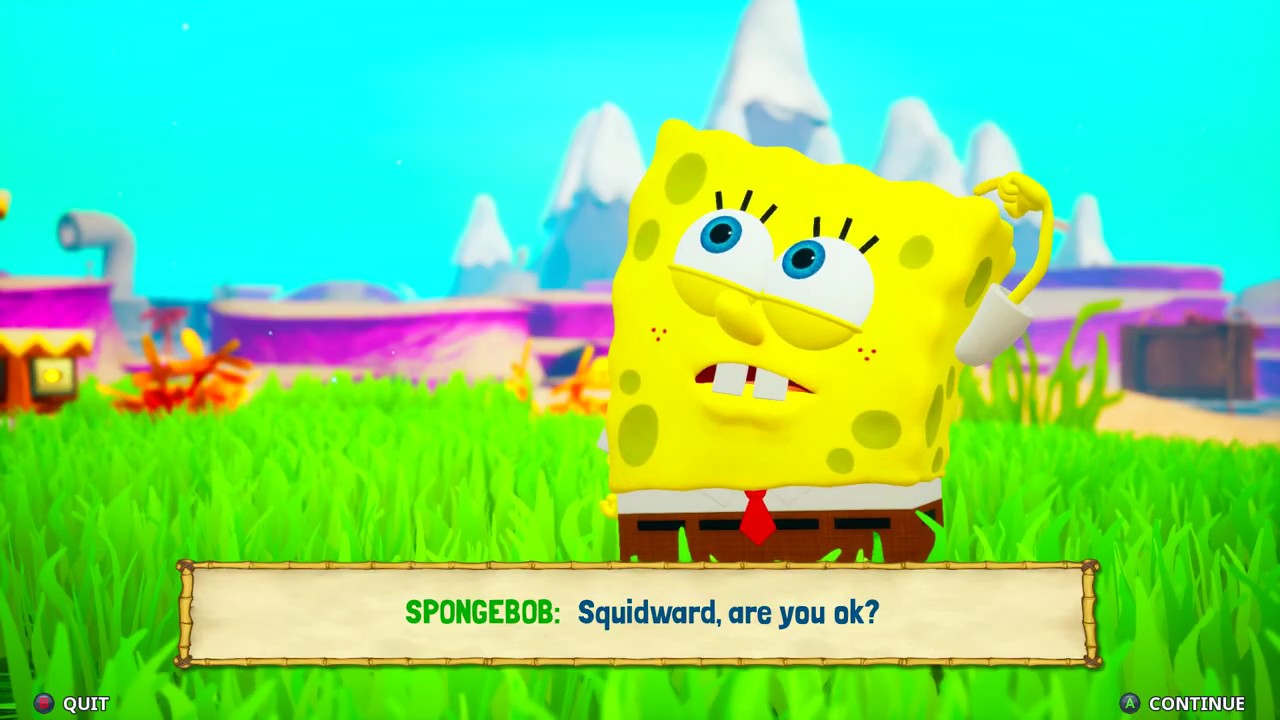 Next thing I want to bring up is the fully animated text sections. You know, the parts where you talk to another character. Yeah, well those parts got a major overhaul from the last demo. Their so much more expressive now, but the voices are a bit out of sync & what is this!?

A Spongebob Movie reference!? This was after the game released so why is that here!? Good question & I have the answer to it. In a recent interview with THQ Nordic Producer, Martin Kreuch.

He said in the interview that these animations were done to reflect & support these lines of dialogue & the overall craziness of the game. They also did new idle animations as well, again to reflect some of the more meme-able moments that happened later on in the series, you know after this game released in 2003.

And speaking of memes, you can pretty much make a meme out of Gary with that face, right? I’m sorry I just can’t help thinking how funny this looks.

There are a few other things to note in this demo, the teleport box now functions & so is the bungee hook. I do have a bit of criticism about this & that has to do with the camera. It just feels, I don’t know. Clunky you could say?

The shiny objects do make a sound more like the OG game instead of the cash register sound in the previous demo. (Sounds) The HUD items are still kind of static instead the rotations they had in the OG.
The Puffer Fish that come out of cannon at the top of the hill, whenever they land their eyes just extend out & thought that was pretty funny.

When bubble slamming the button to activate the barrels in the water, the cutscene that shows the barrels coming out of the water. Well it’s not there, same could be said for the previous demo with this area here. So are these tiny cutscenes just being removed altogether? Because if they are I’d imagine there could be some confusion on what’s going on. Unless it’s right there in front of you to begin with.

Not a whole lot else was shown here, so there’s not much else to really discuss. Unless you count the jump stall, what this means that if you do a spin with Spongebob in the air you’ll get some extra distance. In the original it worked, but not everytime. As sometimes you’ll expect to get a little bit more distance & just go straight to the ground instead.
Well the latter happened at a certain point in the demo, where Spongebob just went straight to the ground instead of stalling. However it did work like it’s supposed to at the start of the demo. But like I said before, it happened in the OG game as well. Whether it was intended or not or if both instances will be in the final game we’re not sure yet.

Also I should quickly point out that the bonus combo shinies appear to be missing. In the OG if you create any combo, big or small, you get bonus shinies that pop up off screen. Again, whether or not it’ll be in the final release we don’t know just yet.

*Above footage by Gematsu
Also we got some details regarding the games hoarde mode. According to IGN, Mr. Krabs, Plankton & Squidward will be playable in this mode alongside Spongebob, Patrick Sandy. Bringing the total of playable characters to 6.

The horde mode would feature waves of robots that everyone would have to take out. And at the end you would face the Robo-Squidward boss. Again, this was cut from the final game & was really curious to see how they’d fit that in. If that’s the case, then perhaps some of the other cut content, like Patrick’s dream could be incorporated here as well. We’ll just have to wait & see on that.

So what do you guys think of this new Spongebob Rehydrated demo? Be sure to let me know in the comments below!