Well thanks to game dataminer BetaM, we have some new datamines for CTR:NF’s November Grand Prix, Neon Circus!

These include skins, karts & a new race mode!

We’ll start with the characters & skins. We’ve got Pasadena O’possum (as if that wasn’t already obvious).

As for skins, well their all still a mystery aside from Hillbilly Fake Crash. But we still got an idea of who will be getting new skins in November. They are; Cortex, N-Gin, Nash, Penta & the Nitro Squad. Correct me if I’m wrong, but I believe this is the 1st time Nash & the Nitro Squad got any skins since being brought into the game.

Koala Kong will be getting a legendary skin, no word on what that will be just yet.

Then there’s the karts, which we’re not entirely sure on except for the Pressurizer. Which is Von Clutch’s Tier 3 kart from CTTR.

A secret special kart called The Veteran, which was found through modding. The name has been changed to Firewing.

A new game mode called “Rings” were mentioned in the games code. Not much is known about this mode, but we got a little bit of an idea of what it’ll be about.

Outside of datamines, I completely overlooked the fact that the new game update came yesterday. Allowing you to play Nina’s Nightmare before the GP even begins. And you can see the new characters & skins as well. Which are all locked. Including Dark Coco, the below Tweet is I’m assuming been achieved through modding.

Both the above & below Tweets are by Twitter user “COGMONKEY”. The below images are high resolution images of some of the paintings from the Haunted Manor section of Nina’s Nightmare.

In these images we can see Twisanity’s Madame Amberly and Dr. Cortex’s pet parrots, Victor & Moritz. Who would go on to become The Evil Twins after…well Cortex’s failed experiment.

And we also got to see younger versions of Cortex, N-Gin & Brio. While Nina picture is taped onto the painting. 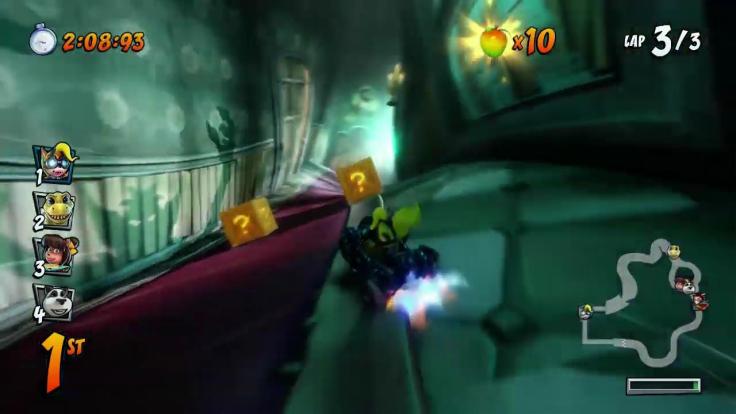 We also learned that Twinsanity’s Evil Crash appeared during Nina’s Nightmare & will be an unlockable sticker. So Evil Crash appearing at a later time could be possible. Originally I thought there would be a Fake Crash version of the character after seeing the title Monster Fake Crash, which wasn’t the case.

The GP will begin tomorrow at 7AM PDT & about 10AM EST.

So what do you guys think about this? Excited for tomorrow’s GP? Be sure to let me know in the comments below!