Spongebob Battle For Bikini Bottom Rehydrated will feature a variety of robots, all of which are from the original game. Let’s go over the 5-Robots that I can’t wait to see! Keep in mind that this does Not include the games main robotic bosses.

This robot is the 2nd robot to be encountered in the game via the Jellyfish Fields level. We’ve seen this particular robot quite a few times in Rehydrated already. Regardless of that little detail, it still made it onto this list.

This bots main ability is pretty self explanatory explanatory by the name. Basically squashing anything in it’s way with ham. Well in the OG it looked like ham, now in Rehydrated it’s metallic instead.

Since it’s one f the earliest robots in the game, it’s very simple to avoid & defeat. However, this is Not the case when entering the cheat code that activates Hard Mode. As Ham-Mer is one of the few bots affected by this, therefore making Ham-mer smash much faster than usual making it hard to avoid.

This bot is what we see at the very start of the game and appears in pretty much every single level. Like Ham-mer, we’ve already seen this one in Rehydrated and is very simple to defeat.

And what I really liked about it in the Rehydrated version is that the eye color changes from green to red depending on what mode it’s in. This is easily seen in the intro to Jellyfish Fields. It’s a nice detail that adds more life to this bot compared to the OG. 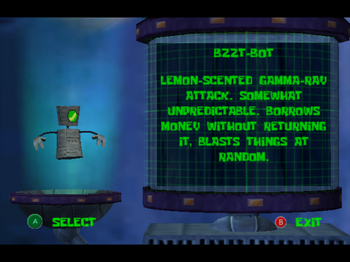 This little robot doesn’t look like much. But this robot has a ranged laser than can affect the player’s character from a good distance away. However, it’s not an immediate affect, as it can take a few seconds for damage to be taken. Giving just enough time to destroy them or get out of reach by jumping onto something that’s higher than them.

This bot also appears in groups of usually 2 or 3 bots. Making things slightly more difficult. The difficulty along with a little strategy are needed for these bots is why their at #3 and I can’t wait to see what Purple Lamp does with these.

This bot is a slightly bit more advanced compared to some of the other robots, which most have at least 1-ability. Chomp Bot has 2; chomping (names pretty self explanatory) & stinky breath.

Now even though the OG robots had some expressive animations, this bot probably had the most varied animations of them all. Probably more when Purple Lamp gives this bot the Fodder treatment.

Like the previous 3-bots on this list, this is an easy one to defeat. However, it usually appears with other robots that require a certain strategy to defeat. Making it a bit more difficult, but not by much. 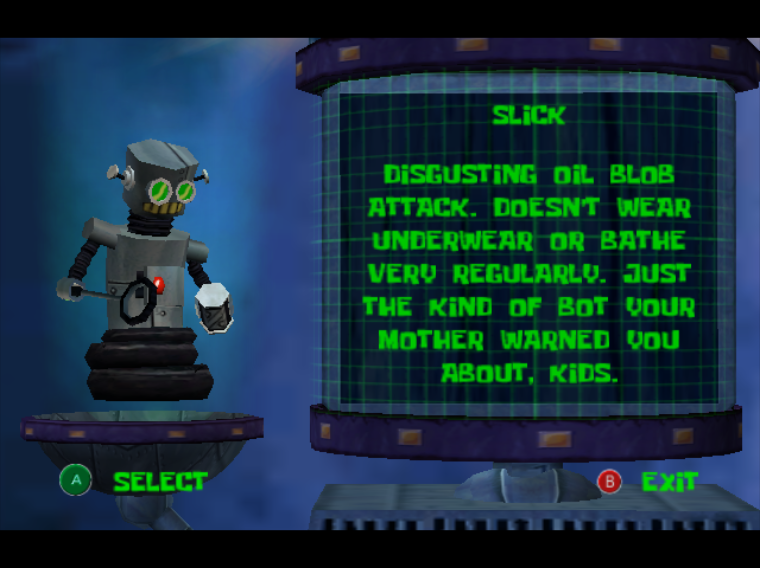 This robot can blow oily bubbles, causing the affected area or character to become very slippery. In addition to this, each one has an oil shield which makes this the trickiest robot in the game to defeat.

Either bubble bowl, cruise bubble or knock another robot into the shield to disable it. Then you take care of Slick like any other robot. Unlike the other bots, aside from the Tubelets & Arf. Slick can take up to 3-hits of damage before being defeated.

What makes things more difficult is that Slick is the only land based robot that can float mid-air. Which serves as a problem if your trying to knock Slick off a platform like other bots. Unless your dealing the last bit of damage, then he will. Since Slick can float mid-air, it’s possible for the bot to go out of reach from your character and the only way to affect him is with either Spongebob’s bubble bowl or Cruise bubble abilities.

I should also point out that Slick is also the begest & least occuring robot in the game. Only appearing in 2-levels overall; The Flying Dutchman’s Graveyard & Spongebob’s Dream. So hopefully this bot can make more appearances in Rehydrated via the cut content and Horde Mode.

So for all these reasons alone is why Slick is at #1.

So what do you guys think about all this? What are your Top 5 bots? Be sure to let me know in the comments below!