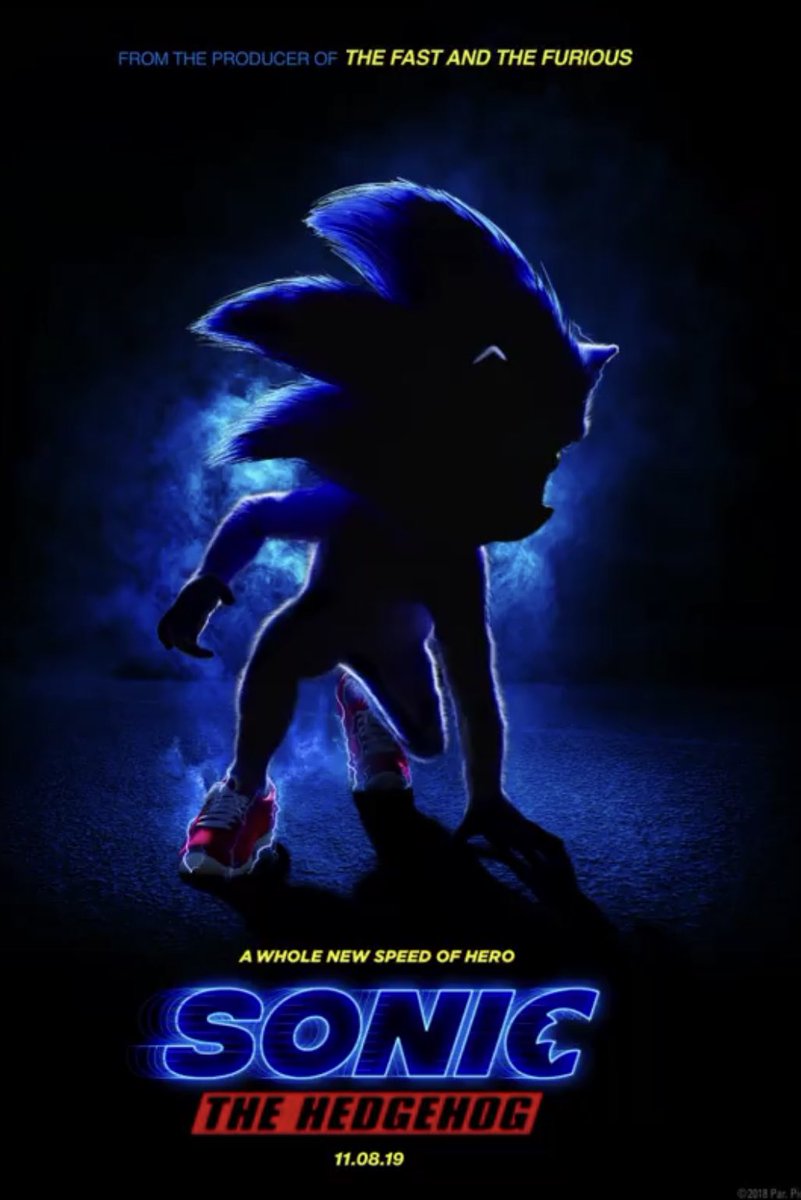 Update: Since this posting, a 2nd poster (which is confirmed real) and an official Twitter Account for the film have appeared.

Well the first motion poster and look at Sonic’s film design has arrived. Meaning now starts the marketing for the film with more teasers, trailers, merchandise and more all the way up until release day. So let’s discuss Sonic’s new design (what we can see of it) and the details from the interview with IGN.

So let’s start with the below motion poster.

Take a look at the brand new motion poster for Sonic The Hedgehog right here! pic.twitter.com/15n5APqaM0

The motion poster does somewhat confirm rings in the film, plus the remade sound. In the interview this was said about Sonic’s speed, “The speed changes over time because he evolves, because he can’t do everything at the beginning of the movie.”

As you can see most of his design, like his eyes and face, are hidden. So we won’t really get to see that until the teaser possibly releases with Bumblebee on the December 21st.

But he does have a more furry texture, which was to be expected. Because that is what they was going for since the start. His head is mostly alright. His mouth/nose area now more closely resembles a real hedgehog. You can still see his eye arch like the games, but it’s unknown if they’ll be connected, according to IGN’s interview Sega wasn’t exactly happy with Sonic’s eyes.

His arms look alright, but he doesn’t appear to have gloves. Which is odd considering he’s had gloves since the franchise started. What we can see of his torso, is alright but we can’t make out the peach coloring. We can’t see his back spines yet though.

Now his legs and shoes are kind of a problem for me, they just don’t seem to fit. Another note concerning his shoes, in IGN’s interview they said that they went through all the different show variants that Sonic’s worn throughout the years. And decided to play homage to that, but also have them as a today’s version of Sonic would wear.

I’ll link IGN’s article below, so you guys can see all entire interview. But there may be entirely CG segments as there will be parts that will Not be set on Earth. So it’s a little like Sonic X. Maybe Sonic will be his CG game appearance in “His World” (joke intended), then he comes to Earth (probably by means of Eggman, like Sonic X) and gets the more realistic look like in the motion poster.

Eggman (probably Robotnik in the film, with Sonic calling him Eggman) was mentioned in the interview, but it’s unknown if Eggman is from Sonic’s world or Earth.

In addition to all this, IGN revealed the UK and Australian release dates for the film. November 28th in Australia & December 26th for the UK.

Anyways, what do you guys think about all this? Do you like (what you can see of) Sonic’s film design? Or do you plan on waiting for the teaser to decide? Let me know what you think in the comments below.