I’m a little late again at posting, but here is the final part of the Sonic timeline series, unless another game gets announced then this ain’t the final part. Anyways in this final post in the series, I will be covering the Sonic Boom series in addition to Sonic Mania and Sonic Forces as well as what little we know about the upcoming Sonic movie releasing next year. So, without further ado let’s get started. 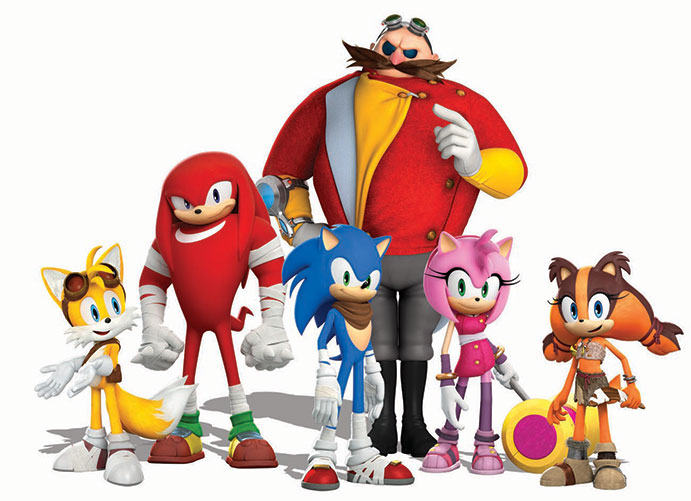 Sonic Boom is a spin-off series to Sega’s Modern/Legacy Sonic series, it was meant to branch away from the main series and go a different direction the main series couldn’t go in. The spin-off series consists of three games; Rise of Lyric (Wii U), Shattered Crystal and Fire & Ice (both for 3DS). The games have been where a lot of the criticism for the series lies (with the exception of Fire & Ice, which received more positive reviews), with Shadow’s lack of backstory and increased aggression toward Team Sonic receiving most of the criticism in Rise of Lyric. Also glitches and problems surrounding Knuckles such as his major redesign and infinite jump glitch which bypasses most of the game, allowing the player to beat the game in about an hour. Some sources even claiming Rise of Lyric was worse than the infamous Sonic 2006 (which is also known for glitches, however they are far less frequent in the Xbox 360 version), now like Sonic 2006, the game went through a lot of changes and concepts as shown in the Sonic Synergy (formerly, before the name switch to Sonic Boom) trailer in contrast to the final game.

Sonic Boom Shattered Crystal on the other hand, received better review scores than Rise of Lyric, however was still critical because the level layouts were made to be like mazes where if you hit a dead end you would have to go back and find another way, which in turn costs the game speed and momentum. Another thing that was negatively received about the game was a system similar to that of the medal system in Sonic Unleashed, where you have to collect so many (I don’t remember what they’re called) of these collectibles in order to continue the games story and unlock levels. Now Sticks is introduced in the Sonic Boom series and was first playable in Shattered Crystal and later in Fire & Ice,as well as games outside of Sonic Boom (even though she is supposed to be a Boom exclusive character) like Sonic Runners and Mario and Sonic Olympics 2016. Shattered Crystal and Rise of Lyric both precede the Sonic Boom TV series and introduce Lyric, Shadow and Metal Sonic into the series.

Sonic Boom Fire & Ice was critically more positive compared to the previous two games in the series, mostly because they removed the barriers and collectible required system. So, the game is basically an improved Shattered Crystal, the game can now keep up the speed and momentum just like the Classic Sonic games. In addition to harnessing Fire and Ice abilities, players are able to control all five Team Sonic members. This game’s events take place sometime during the shows second season and introduces D-Fekt an Eggman robot with telekinetic abilities that soon gets out of hand, with Team Sonic having to save the Doctor from his own creation. D-Fekt also appears in the Sonic Boom episode “Return to Beyond the Valley of the Cubots”, which is a follow up episode to Fire & Ice, which is also written by the writers of Sonic Boom: Fire & Ice and Sonic Forces.

Now in contrast to the Sonic Boom games, the TV show was more positively received now having two seasons and yet to be renewed for a third season. Sonic Boom is no doubt the best Sonic cartoon of all time, now the story of the show is more comedic and episodic (kind of like Spongebob) and not as dark or have an over-arching storyline like the Sonic Boom or Modern/Legacy Sonic games. Originally there was not going to be a TV show based on the Sonic Boom spin-off series, basically the idea came along after the games were about half-way finished. The show itself combines action, speed and humor (including 4th wall breaks) as well as a great cast of characters both new and old. In addition to the series’ second season are multi-parter episodes, which are episodes that have over-arching plots, there are currently only two sets of multi-parters (Robots From the Sky 4-parts and Eggman the Video Game 2-parts). There are also three returning characters from the Modern Sonic series of games redesigned for Sonic Boom; Shadow the Hedgehog, Metal Sonic and Vector the Crocodile. These characters typically appear  toward the last quarter of the season. Each season consists of fifty-two 11-minute episodes and is currently the only Sonic series with the most episodes. Shortly after season two premiered there was a rumor that a season 3 is in the works according to a story-board artist working on the show, but nothing else is known.

Sonic Mania is Sega’s newest and most popular Sonic game in a long time. Released in August 2017, Sonic Mania is a new retro Classic Sonic game where players take control of Sonic, Knuckles and Tails to stop Doctor Eggman and his new class of robots, the Hard-Boiled Eggies. The game also features a new move, the drop dash which instantly allows you immediately drop to the ground and spin-dash at the same time. The game also introduces the Phantom Ruby, which would become a main plot element in Sonic Forces. This Sonic game is the first to have 4K resolution as well as the first Sonic game released on the Nintendo Switch. Sonic Mania is also the best received Sonic game in fifteen years 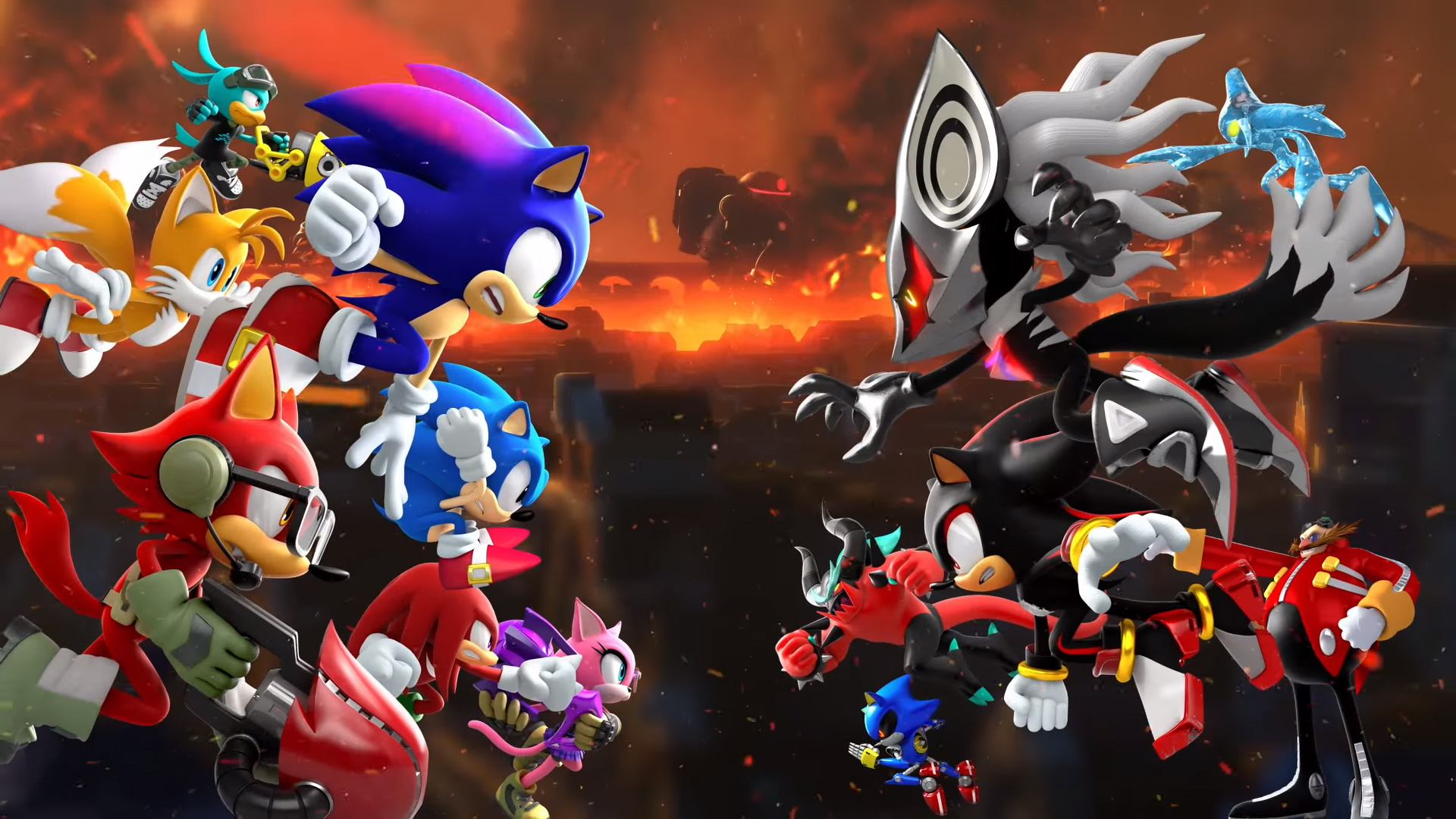 Sonic Forces is the newest installment in the 3D series of Sonic games following the events of Sonic Lost World and Sonic Mania. The game utilizes the Hedgehog Engine 2, an upgraded version of the Hedgehog Engine used in Sonic Unleashed, Generations and Lost World. The game features four playable characters (including DLC) each with their own play styles; Modern Sonic, Classic Sonic, Shadow The Hedgehog (episode Shadow DLC) and the Custom Avatar. Modern Sonic’s levels are 3D based but switches to 2D like in past games, also included is the boost mechanic from previous games are utilized by both Modern Sonic and Shadow the Hedgehog. Classic Sonic’s gameplay is more similar to Sonic Generations, but now includes the drop dash from Sonic Mania. Shadow’s gameplay is very similar to Modern Sonic’s, Shadow can perform boost, homing attacks and an improvised light speed attack from Sonic Adventure 2. The Custom Avatar can be customized to how the player wants, even making a Sonic Boom type character, the Avatar is equipped with a grappling hook and a wispon of the players choice. The Wispons can harness the Hyper-Go-On powers of the Wisps in new ways in addition to the normal use, while the grappling hook allows the player to swing across gaps to access new areas.

Sonic Forces also implements a new gameplay style known as Tag Team Stages, where the player automaticly switches between Modern Sonic and the Custom Avatar to reach the end of the level. Even utilizing a new technique known as the double boost, which allows Modern Sonic and the Custom Avatar to run faster for a short amount of time. Episode Shadow in comparison to the main game, is a lot more difficult. Super Sonic however,is not unlockable in game, instead it is a separate DLC for both Modern and Classic Sonic, it is free for about another week, which is the first time that has ever happened in a Sonic game. Sonic Forces also introduces Infinite, who after being defeated by Shadow, decided to have the Phantom Ruby fused to him with the help of Doctor Eggman in his efforts to rule the world. Now the story in Sonic Forces is top notch as well as it’s extended cast of all-star Sonic characters, in comparison to games like Colors, Lost World and Generations. Now I’m a little disappointed that Blaze the Cat, who is one of the more popular characters in the series, didn’t appear in Forces, but appeared in Sonic Forces Speed Battle instead.

However the game’s reception was less positive than Sonic Mania, however it received a decent score, 7/10 stars on Steam games. It was mostly criticized for the game being to automated, Modern Sonic’s short level length, Classic Sonic’s controls for not running as smooth as in Generations or his general purpose in Forces’ story, and probably the most criticized is the Custom Avatar’s plentiful trial and error, having to go through levels multiple times to collect everything with different wispons. Now the games soundtrack was some of the best music I have heard in the series, now there are two tracks I do criticize, Fist Bump’s attempt at Endless Possibilty from Sonic Unleashed and Infinite’s Theme, other than that the soundtrack is great. In addition to the main soundtrack is Episode Shadow’s collection of remix’s of Shadow stages from previous games like Westopolis (Shadow The Hedgehog, 2005), Rhythm and Balance and Supporting Me (White Jungle and The Biolizard, both from Sonic Adventure 2, 2001). Also included are US remix of Stardust Speedway for Metal Sonic’s boss battle, as well as the Infinite Boss battle theme’s and especially Death Egg Robot Phase 3, which is the most epic piece of music in the game.

Now Sonic The Hedgehog movie news is pretty scarce right now, but we still don’t know anything else since they switched distribution companies outside of the crew remaining the same. I hope they can pull this off and have some of my favorite characters in it like Sonic and Eggman (obviously), Shadow, Silver, Blaze and Metal Sonic. Now for another big villain alongside Eggman I’d say they could go with either Infinite, Chaos or Dark Gaia or Shadow (depending on what game story their going with, if they using a game story at all, they could be using a brand new story for all we know), but what the film needs to have is a sense of speed, lots of action and a Super Sonic ending. While also still looking and feeling like the Sonic series, but I just want it to be like the Sonic Unleashed intro. But here it is 2018, so that means news on the film will be arriving soon, possibly around June since that is when E3 takes place, plus Sonic’s 27th anniversary. The film however, will release either during Sonic’s 27th or 28th Anniversary, depending if it releases before or after June 23rd, 2019.

Stay tuned for my next news roundup of Sonic and other media all in one place, I haven’t really messed with my Youtube Channel lately, but I plan on getting that up to date (A New YouTube Channel, Blueknight V2.0, as of 2018) and starting a new SFM Sonic movie series recreating cutscenes or doing like Sonic VS. videos alongside my news videos. There is still room for me to do Lego Stop-motions though. Remember to check back regularly for more news and updates at the speed of sound.